Sweetcorn: The Nigerian Government And YBNL Are The Same

UK based rapper, Sweet Corn has expressed his disappointment in Olamide and his record label YBNL.

According to the “secure the bag crooner” has compared Olamide and his label with the Nigerian government, claiming they don’t care about the people in this care.

We have heard this story before but it had different names, a record label, tales in a young artist with the promise of building their career, only to leave them with broken dreams, disappointment, and scared mental health.

But one name has been occurring more too often in these stories, that’s the name of Nigerian indigenous rapper, Olamide, who has been accused of treating his artists unfairly.

In his latest scandal, singer, Temmie Ovwasa, has come out to talk about her experience in the rapper’s label, in the interview with mhojohub, she talks about how she was prevented from doing shows and releasing music.

And while her music career was busy going down the drain no explanation was given to her for the hold-up.

Sweetcorn has called out the indigenous rapper saying the rapper shouldn’t identify himself as a boss, since he has messed up the mental health of those he promised to help fulfil their dreams. 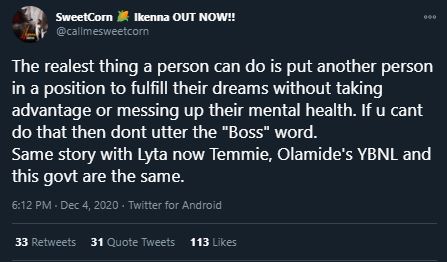 Mikel Arteta: Tottenham Are Not Title Contenders Yet

Rapper Eldee: Why I Left Nigeria